Request for a Quote

The Quarter Master Protek Failsafe Electric Actuator features a rechargeable battery pack that is capable of 25 cycles under full load conditions, a built-in trickle charger, a low battery indicator, and an auxiliary limit switch that is calibrated with the fail position. The battery pack is installed inside of the actuator housing, so a separate enclosure to house the battery is not required.

Locations requiring both an electric actuator and a power-loss open/close backup. 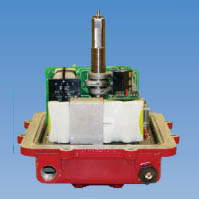